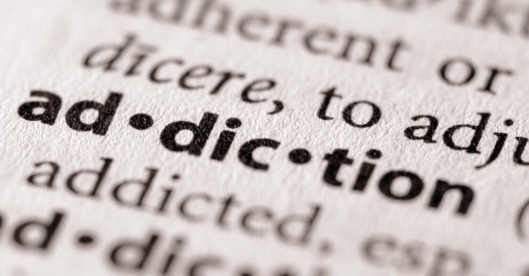 Sometimes, when life is going swimmingly and everything is all right with the world I struggle to understand why anyone takes drugs. I especially cannot imagine why anyone who has been to hell and back through addiction would ever pick them back up again. You know what it’s like both sides of the line and you know that it is infinitly better on the drug free side.

And then something will happen, it may be something catastrophic, or it might be one small thing, that, pulled on top of all the other small things just makes you forget the negatives. And you remember why. It’s like a switch in the brain that wipes the times you just wanted to die because you’d had enough of addiction, the craving, of being sick and tired. It erases the feelings of withdrawal and the constant nagging that used to sit in your gut wondering where you were going to get your next hit from, and it is like someone got a highlighter pen, or hit “control+B” to emboldened only the memories of the good parts and greyed out the bad.

You remember the way that the skin pushed against the tip of the needle as you gently pushed it against the vein underneath. The push of resistance before it pierces the life of you. You remember the colour and rush of the blood as it forms a cyclone as you hit the right spot, drawing it into the barrel of the syringe. It’s almost branded on your brain; the feeling of anticipation as you move to push back plunger. As you turn the tide of the blood and begin to push the golden brown liquid into your body. Knowing, as only an addict can know the nothingness that will inevitably, slowly, if only temporarily, come.

Because every addict I’ve ever known has been someone who felt too deeply; who struggles to manage their own emotions. That’s one of the reasons they ended up addicted. The pull of absolution promised by the release from the struggles of life, is sometimes more than they can bear. So they turn back to the needle, to the quietness that they crave. To the almost irresistible feeling of momentary peace.

How many people can honestly say that they’ve never just wanted the world to go away and leave them the hell alone?

To know that you can not feel confused, scared, an emotional and physical wreck, and instead feel nothing is a hard knowledge to live with, because who wouldn’t, addict or not, occasionally just want release from all the pain stress and heartbreak of real life. As an addict you know better than anyone that that release is available. And that, unlike a lot of other solutions, it works. Once you know it’s possible, there’s nothing stopping you apart from fear of going back to addiction. And when you feel confused enough to be considering using, you probably aren’t in the right frame of mind to think that far ahead. You forget that one hit is too many and at the same time will never be enough.

So occasionally, not using, even after years of recovery, can be a life or death battle. And sometimes people don’t win it.

I’ve always been lucky enough to have people to pull me back from the brink. Who I can turn to to unload before I get to the stage that I’ve wiped out the memories of addiction and replaced them with thoughts of oblivion. And I’ve always managed to speak to them before I walked off the edge. Not everyone is that blessed.

So before you judge someone for relapsing, for turning back to drugs and all the turmoil that ensues, imagine that at your very lowest; if someone offered you a temporary release from all your problems, would you consider it? If only momentarily? 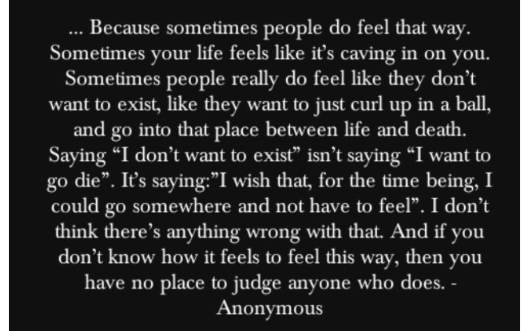 It’s an expression that you hear and it doesn’t mean much, and you will think that the person saying it is being melodramatic, attention seeking even. And then one day, all of a sudden, you just get it. You know what those words, that phrase means.

You struggle on day after day, same old, same old; work, food shopping, kids clubs, cooking, cleaning, washing, money management, budgeting. Life admin that just keeps building up, letters to write, letters to post, emails to send, car insurance to get quotes for. Household items to replace. Lawns to mow. People to see. Sheets to change. Things to fix. Things to remember. Appointments to go to. Trains to catch, children to drop off, pick up, take to parties and you do it. You do it all, sometimes you even have time to remember to brush your hair.

And you forget. You forgot just how precariously balanced it all is. How the slightest most insignificant thing can just throw you over the edge. A thoughtless remark, an unexpected bill, a difficult phone call, then boom, just like that, the smallest thing exposes you for what you knew you were. Incompetent. Over committed and under resourced. And you know this to be the case because the thing that tips the balance from excelling at life to fucking it all up badly, is so bloody insignificant that you can’t understand how it’s brought you to your knees; from having your shit together to hiding in the bathroom silently sobbing so that the kids can’t hear you. So that no one knows how goddamned tired you are.

No one knows how difficult it is to pull your shit back together. When you haven’t slept properly in what feels like months because your brain can’t shut the hell up from thinking about how rubbish you are; scared that at any point it’s all going to go tumbling. Worried that you are doing life wrong. Tired. Right through to the bones; to the point that you can feel it in every fibre of your being.

It is at that point that you are feeling your worst that you need to reach out to people. You need someone else to hold the weight of your soul for you, even momentarily. For a minute, an hour. Long enough for you to pick yourself back up, shake yourself down and put back on your smile. Everyone needs that at some point.

So next time you get a message from someone, maybe out of the blue, or an email or a call, asking to talk, to meet up, or even just saying hello, take the time to respond. If you see someone upset or distressed, even a total stranger, take the time to stop. Maybe a simple “are you ok?” is enough to break the cycle. To let them vent. To make things OK for them once again. Take the weight. Give them a chance to pull themselves back up. To connect; adjust and move on.

We all need help at some point.